SAN JUAN, 03/08/16 – The Ministers and the Millennials shared the stage at CANTO 2016 on Tuesday August 2nd, the second day the ongoing CANTO 32nd Annual Conference and Trade Exhibition which is currently taking place at the Sheraton Puerto Rico Hotel and Casino from July 31st – August 5th.

It was the second ministers’ round table that started off the day. Chaired by CANTO Chairman Julian Wilkins and Vice-Chairman Leon Williams, the conversation was current and vibrant.  Ministers from different territories continued to show that they have the best future for ICT in the region at heart.

The keynote for the session was entitled: Leading New ICT, Making Safer Cities and it was delivered by Luis Guillot of Huawei Technologies. Participants included Corrine Philip from Digicel, Sen. The Honourable Darcy Boyce, Barbados; The Hon. Andrew Wheatley, Jamaica; the Hon. Paul. J. Lewis, Montserrat and Dr. Jerrol Thompson from St. Vincent and the Grenadines. One of the major developments coming out of the panel was a call for the establishment of a working group including CANTO, regional Ministers and the CTU to work year-round and not just at CANTO Conferences in seeking the region’s interests.

Minister Boyce raised the issue of the need for extensive consultation, not just within the region but also beyond so that we can yield greater benefits from best practices and options for finding solutions to pricing, and directing the development of ICT. Other issues discussed included Net neutrality, the need for greater investments in network as well as the need for the Caribbean to become more producers of technology than consumers.

Not to be overshadowed by the fruitful discussions of the ministers in another room the Millennials were busy putting the finishing touches on their respective prototypes for demonstration as the CODE Hackathon came to an end after some 48 hours of grueling dedication.

Four teams were engaged in the event to create an app using the Kandy Platform. Team 404 came from Suriname and presented “Call 911” a disaster management solution. Team BAHACODE hailed from the Bahamas and they offered an office directory solution. Coming from Belize was team CodeIt who presented “Kapoint,” a customer service solution, and the team from Trinidad and Tobago, Raiora, presented “Say.fer” a disaster management solution. The second CANTO C.O.D.E. Hackathon was sponsored by DSS, Kandy.io and facilitated by Piedata.

The competition was very close and the judges had their work cut out. Herbert A. (Haz) Samuel was one of the judges, he being no stranger to app development was also on hand to deliver some motivational words to the participants. In the end it was team Suriname that was victorious. The quality of work presented by all teams continues to show the future generations will have something to contribute to us being more producers and less consumers.

The day culminated with a visit to Paseo de Princesa in old San Juan for a night of Puerto Rican food, culture, entertainment and sightseeing. 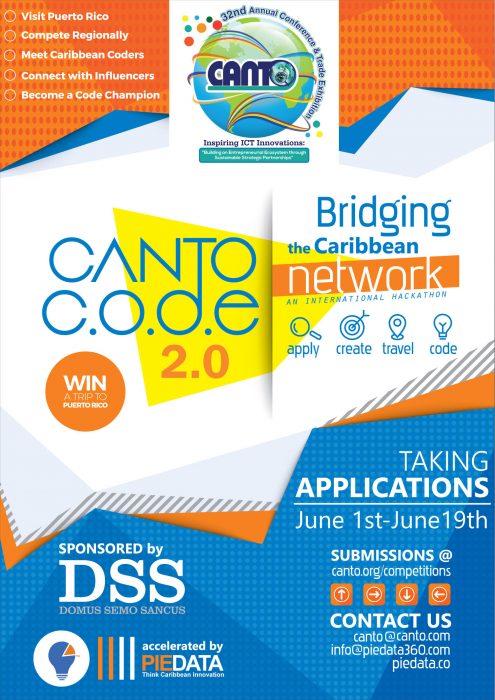